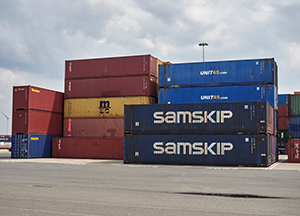 Samskip is an international shipping company that provides transportation and related services by land, sea and air. It is one of the largest transportation companies in Europe, with €560 million in turnover annually, and operates in 24 countries in Europe, North and South America, Asia, and Australia.

Samskip operates a fleet of 14 vessels with carrying capacity of 9,940 TEUs. The company recorded a transport volume of 712,000 TEUs annually, as well as a net income of €12.2 million, up 32 percent year-over-year.

Could Melio be key to post-corona success?

Navigating the Winding Roads This Peak Season & Beyond
END_OF_DOCUMENT_TOKEN_TO_BE_REPLACED

Samskip gets OK for Nor Lines acquisition
30 Aug 2017
Samskip has not revealed how much it is paying for Nor Lines.

Samskip aims to acquire Nor Lines after Eimskip rebuffed
25 Jul 2017
The move would build upon Samskip’s penetration of the shipping market between Norway and Northern Europe in recent years.