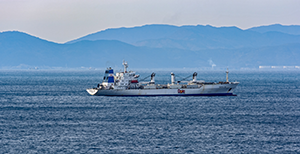 Dole Ocean Cargo Express is the name of the transportation division of Dole — the world’s largest producer of bananas and pineapples, and also a producer of packaged salads and vegetables. The Jacksonville, Florida-based company dates back to the late 1800s, when Standard Fruit Co., the predecessor to Dole Food Co., began shipping bananas into North America.

Dole Ocean Cargo was incorporated in 1993 to handle the large volume of fruit shipments. Dole manages its own supply chain with its fleet of 10 vessels and carrying capacity of 9,178 TEUs. The company also provides containerized cargo shipping services to other firms.

US–Carib/Central America trade slips for first time in four years
22 Nov 2019
Growth in US imports from the Caribbean and Central America was unable to offset a decline in exports in the first nine months of 2019.

JOC Top 40 container carrier rankings first half 2019
16 Sep 2019
Container carriers in the slowing US import and export trades are exercising increased discipline, maintaining capacity levels rather than introducing new vessels in an attempt to secure a larger share of the market.

Dole deploys container ships on Latin America-California route
08 Feb 2016
Dole’s deployment of the Dole Pacific on regular service between California and Latin America is the latest sign of how refrigerated ship operators are turning increasingly to container ships from traditional break bulk vessels.
Dole Agrees to Stay at Delaware’s Port of Wilmington
16 Aug 2013
The Diamond State Port Corp., operator of Delaware’s Port of Wilmington, and Dole Foods have reached an agreement in principle by which Dole will continue to use the Port of Wilmington...
Dole Invests $165 Million in Reefer Container Ships
29 May 2013
Dole has suspended a previously announced $200 million share buyback program in order to mitigate losses from its strawberry business and revamp its fleet of container ships, Fox Business reports.

US truckload spot rates sag in November in atypical move