Ocean Network Express (ONE) grew its first-half US export volume 27.2 percent, the most of any of the top five carriers in the trade, rebounding from a 9.8 percent loss the previous year. Photo credit: Sheila Fitzgerald/Shutterstock.com.

United States containerized import and export volume growth may be slowing, but major container lines are showing restraint in how much market share they chase via the introduction of new vessel capacity, as reflected by an analysis of data from PIERS and Alphaliner.

France-based ocean carrier CMA CGM and subsidiary line APL handled the largest combined share of US containerized imports in the first half, with Geneva-based Mediterranean Shipping Co. closely following, according to PIERS, a sister product of JOC.com within IHS Markit. The top five carriers and common-owned companies maintained approximately the same share of US imports they had in the same 2018 period, at 62 percent, even as year-over-year volume growth slowed to 3.4 percent, from 7.8 percent last year.

MSC was the fastest growing of the five largest carriers of US imports in the first half, increasing its volume 9.1 percent from the same 2018 period. Chinese state-run carrier Cosco Shipping and subsidiary OOCL were the only lines to report a decline in volume during the period, as its total US imports slid 4.9 percent year over year.

Among the top five carriers of US container exports, Ocean Network Express (ONE) — the merged container operations of Japan’s NYK Line, Mitsui O.S.K. Lines, and “K” Line — saw the biggest gains, with first-half volume growth rebounding to 27.2 percent after a 9.8 percent loss the previous year. CMA CGM and APL saw the largest decline, with combined US export volume dropping 5.3 percent compared with a 3.4 percent increase in the first half of 2018.

Rising global competition and Chinese retaliatory tariffs on US exports continued to drag on total outbound US volume, pulling the overall year-over-year growth rate down to 1.6 percent. By comparison, US export volumes increased 8.2 percent year over year in the first six months of 2016, before decelerating to a 7 percent growth rate in 2017 and a 2.9 percent rate in 2018.

On the global stage, Maersk still leads the way in total capacity with an 18.9 percent share of the top-50 carrier fleet, according to maritime researcher Alphaliner, followed by MSC (16.3 percent), Cosco Shipping (13.3 percent), CMA CGM Group (12.3 percent), and Hapag-Lloyd (7.6 percent). Over the last few years, carrier consolidation via mergers and acquisitions has increased the total market share of the 10 largest fleet operators to 87.9 percent, with the top five operators now controlling 68.4 percent of deployed capacity.

Unlike several of the other large global carriers, however, Maersk has repeatedly told investors it had no plans to expand its existing capacity at present. True to its word, Maersk’s orderbook accounts for no more than 28,700 TEU of capacity, or 0.7 percent of its total fleet of 4.18 million TEU. By contrast, ninth-largest carrier HMM of South Korea has 20 ships on order with an aggregate capacity equal to approximately 97 percent (396,000 TEU) of its existing 408,285-TEU fleet.

“We maintain that we want to stay around 4 million TEU of deployed capacity,” Maersk Group CEO Søren Skou said during a conference call on Aug 15. “We will need some extra tonnage chartered in because we have ships retrofitting scrubbers and have invested a little more capacity in slow steaming this year. But we want to remain disciplined on capacity and stick to our guidance of 4 million deployed capacity, because it helps drive utilization up and unit costs down.” 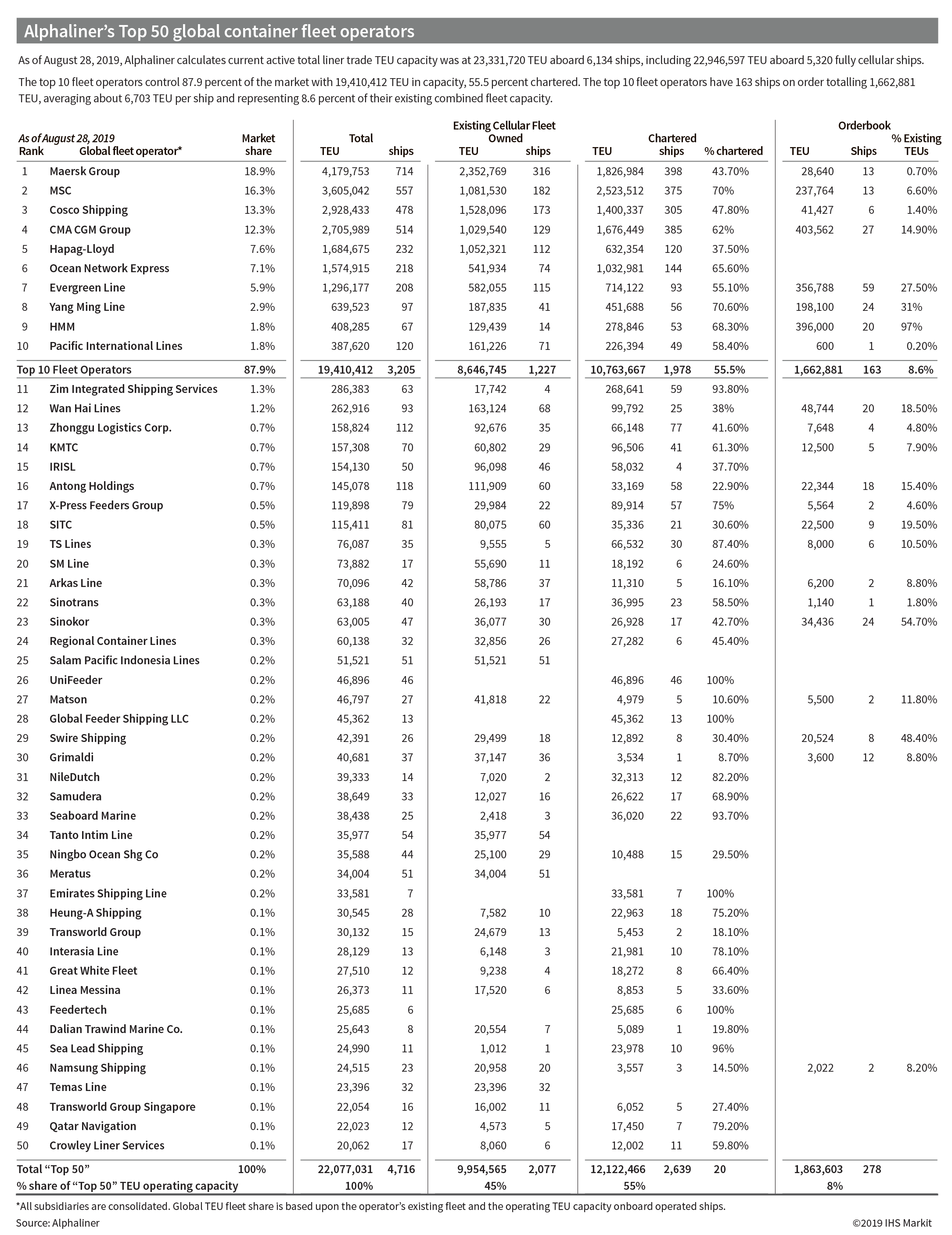 Trans-Pacific recovery could be more than a year away: analyst