As the year beckons, the north-south route is characterized by multiple carrier options, all trying to capture business. Photo credit: Hamburg Sud.

A 2.6 percent increase in trade on the north-south routes between the United States and Latin America in 2017 set the stage for potential further increases in the coming year, even as significant market changes may be on the way.

Key among them is Maersk Line’s acquisition of Hamburg Sud, a dominant player in Latin America, and how the world’s largest carrier will integrate the German company with Maersk’s SeaLand brand, which also serves Latin America. 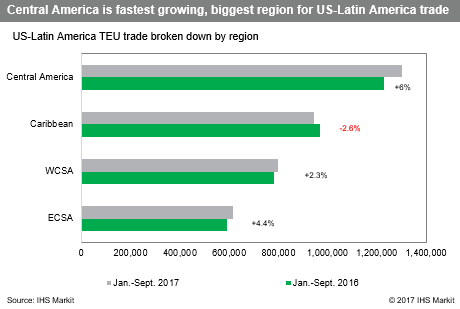 Other uncertainties on the US-Latin American routes are the impact of the continued struggles of hurricane-devastated Puerto Rico, the second-largest trading country in the region, with 513,000 TEU, to get back on its feet, and whether the Brazilian economy will continue its recovery. Brazil is the largest trading partner on the north-south routes, accounting for 601,000 TEU in 2016, a 3.5 percent increase from 2015.

The routes also could be affected by the impact on Mexico, the north-south routes’ ninth-largest marine trading partner, of the ongoing talks about the reform — and possible abandonment — of the North American Free Trade Agreement (NAFTA). Although most Mexican trade to the United States moves by road, the country handled nearly 200,000 TEU by sea with the United States in 2016.

A key issue in 2018 will be whether further consolidation, such as Maersk’s acquisition of Hamburg Sud, stifles competition and possibly impacts prices, according to Jason Lloyd, director of freight trade at Interra International, a North Carolina-based exporter of meats and other food to Latin America.

At the moment “there are more carrier options with greater capacity trying to capture business,” he said. “The carriers see growth in this region of the world. In the last couple of years, we have experienced stronger competition from larger carriers, all trying to capture that business with competitive pricing and favorable transit times to most destinations.”

Jacksonville-based Crowley Liner Services in August launched a route from Florida to Costa Rica and Panama, and began a vessel-sharing agreement with Miami-based King Ocean Services that expanded services to the Caribbean.

“Vessel capacity and carrier options are not limited in the north and south lanes from the US,” Interra said. “Demand remains strong for imports into the US and business into most of the southbound markets is attractive for carriers.” 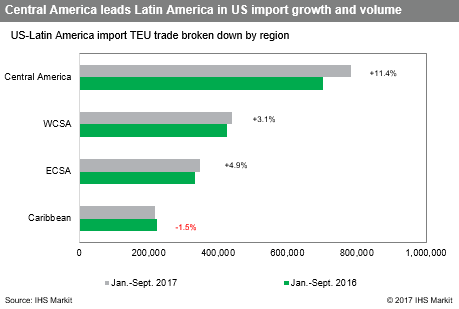 US imports from Latin America increased 6.3 percent in the first nine months of 2017 from the same period a year earlier, led by an 11.4 percent jump in Central American volumes, the figures show. At 784,000 TEU for the nine-month period, the Central America volume — about 60 percent of which is fruit and nuts — was slightly less than the volume of cargo imported from South America’s east and west coasts combined.

Exports from the United States to Latin America declined 0.7 percent in the period from a year earlier, with volumes down 2.9 percent to Central America and 2.9 percent to the Caribbean. Exports to South America’s west and east coasts rose 1.4 and 3.7 percent, respectively.

That demand left rates stable on the spot market, according to London-based shipping analyst Drewry. Spot rates from the Brazil’s Port of Santos to the Port of New York and New Jersey were about $2,600 per FEU in July, while New York to Santos spot rates lagged at nearly $1,200 per FEU, Drewry’s Container Freight Rate Insight revealed.

How the Maersk-Hamburg Sud linkup will impact rates remains to be seen. Maersk Line, SeaLand, and Hamburg Sud combined controlled 14.1 percent of the trade in the first eight months of 2017, about the same as a year earlier, according to PIERS. That 14.1 percent ranked just behind Mediterranean Shipping Co.’s 14.3 percent market share and above Seaboard Marine’s 10.9 percent share.

Hamburg Sud is the only one of the top 10 container lines with a strong focus on north-south trades, particularly to and from South America, and refrigerated cargo is important to the carrier. Announcing the acquisition, Maersk said it was a unique opportunity to boost Maersk’s presence in Latin America and grow its reefer business.

“The brands will continue to operate side by side and, via a combined network, be able to offer customers expanded products,” said Katherine Mosquera, a Maersk spokeswoman. Maersk, Hamburg Sud, and SeaLand will “complement each other with different customer value propositions,” she added. 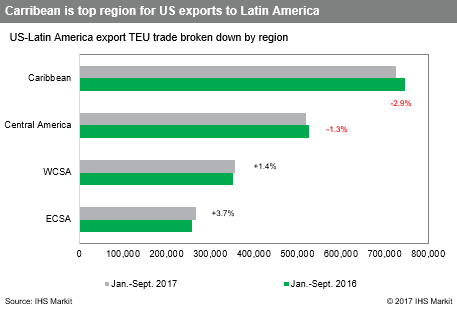 The deal closed on Nov. 30, when Korea became the last of 23 jurisdictions to grant regulatory approval. China approved the acquisition earlier in November, but put some restrictions on the deal, including a requirement that Hamburg Sud cannot extend its involvement in a vessel-sharing agreement in the Asia-west coast South America trade. China also required that Hamburg Sud withdraw from an Asia-east coast South America agreement.

In an earlier ruling, Brazil mandated that Maersk sell its Mercosul Line, a Brazil-based carrier that serves the east coast of South America, a deal it consummated with CMA CGM on Dec. 8.

Those changes likely will add to the uncertainty on a route that, although calm compared with major east-west trades, is also unpredictable. PhilaPort felt the impact of that volatility in 2017. In January 2016 the port proudly hosted the first SeaLand ship on a new service — called Atlantico — linking Philadelphia to Veracruz and Altamira in Mexico. The service followed several port-organized trade missions to Mexico that encouraged fruit farmers to export by sea to the United States with the belief that there was sufficient demand to make the route viable.

However, the Atlantico route closed last spring amid weak demand and competition from trucking. “There was a lot of success with dry cargo,” said Sean Mahoney, director of marketing for PhilaPort. “However, it was the reefer cargo volumes which did not materialize and mature into the volume needed to sustain the service.”

One reason for the soft reefer volumes was that trucking fruit up from Mexico offers imports more flexibility, allowing them to decide where to send the cargo on route, he said. In addition, he said: “Cheap fuel prices allowed for traditional truck transport to remain very competitive.”

US second-half imports to slow vs. year ago: retailers

Convoy–DAT battle a sign of impending load board disruption

Getting and Keeping Your Parcel Operations on Track in 2022
Download

How to Improve OTIF: 15 Tips for On Time and In Full Delivery
Download
END_OF_DOCUMENT_TOKEN_TO_BE_REPLACED